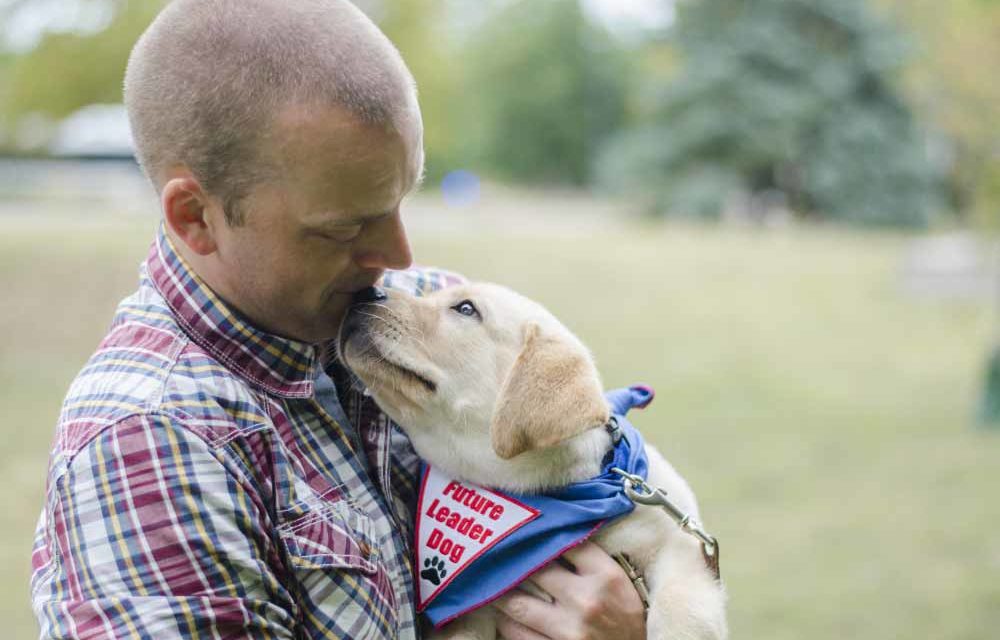 When Charlie, a yellow Labrador retriever, returns to Rochester Hills, Michigan, on August 7, he will have visited 25 states alongside assistant professor of journalism Robin Blom.

Blom picked up 8-week old Charlie at Leader Dogs for the Blind on August 26, 2015, and began training with him with “puppy push-ups,” or basic commands such as sit and lie down.

Blom’s job is to help Charlie remember those commands so that when he returns to Michigan for further guide dog training, the trainers there can build upon that foundation.

“We’re practicing every single day,” Blom said. “When he just got here in Muncie with me he was 8 weeks old, and that’s where you really practice all the basic stuff. The beginning is really trying to enforce those commands.”

To train Charlie in social situations, Blom brought him to campus, the store, conferences and everywhere in between. Charlie has been to the Atlanta airport 12 times for connecting flights, and he can now almost walk Blom out of the airport on his own.

Charlie wears a handkerchief or vest to signal to him and everyone else that he was working and not on playtime, so he would have to behave differently.

Blom knew someone who had gone through the process, and he thought it would be fun to do it himself. He also wanted to help people who need a guide dog.

“I’m on campus the entire day, and then I go home and eat something and then do a little bit more work. I’m very busy,” Blom said. “I could just have a puppy next to me and do my work and help raise a dog for the organization. I have to go to the store anyway, so it doesn’t really matter if a puppy is with me or not. I mean, it’s gonna take a few more minutes. In the same, I have to fly to conferences, so I’ll be on the plane regardless, so why not bring a puppy?”

Once he returns to Leader Dogs for the Blind, Charlie will undergo a medical check and be potentially selected for the breeding stock. If he is not selected for breeding, he will be neutered and then enter the training program.

If it works out, the person and Charlie will become “forever partners.”

If Charlie fails out of the leader dog program and is not selected for another organization, Blom would have first dibs on getting Charlie back. However, with Blom’s long work hours and frequent travel to conferences, he doesn’t want Charlie to have to be in a crate all day.

“I’ve been to probably five or six conferences during spring semester alone, … my family is in the Netherlands, … I usually go home for two to three months during the summer and a few weeks during winter break, so that would mean that I would have to find someone to dog sit for all those occasions, and that’s gonna be just a nightmare to get that done,” Blom said. “I think it’s better for him to find another loving family where there’s more people that can pay attention to him.”

Blom said he will miss Charlie, but knows there are people who need Charlie more than him. He is allowed to go back and say goodbye to Charlie before he leaves with his forever person.

“The main thing is that it’s a very affectionate group of people that are volunteering for this program,” he said.

Blom has met other leader dog raisers both in person and in a Facebook group, as well as people who are appreciative of the training he and other raisers do.

Recently, he traveled to the Alpine Valley Music Theatre in Wisconsin for a Dave Matthews Band concert with Charlie when he was approached by a woman.

“A lady came up to me to thank me because her brother was on his third leader dog from that organization. … What you learn is that you’re doing something very valuable that means a lot to a lot of people, and many of those people are in the situation that they can really use their dog to stay independent,” Blom said. “I knew that in advance, but when you go through this process, you are even more so aware that it’s important that there’s a lot of people trying to volunteer and help raise these kind of dogs so the best can graduate and help someone.”

Though Blom plans to take a break for a while, he said there is a good chance he will raise another leader dog in about a year.